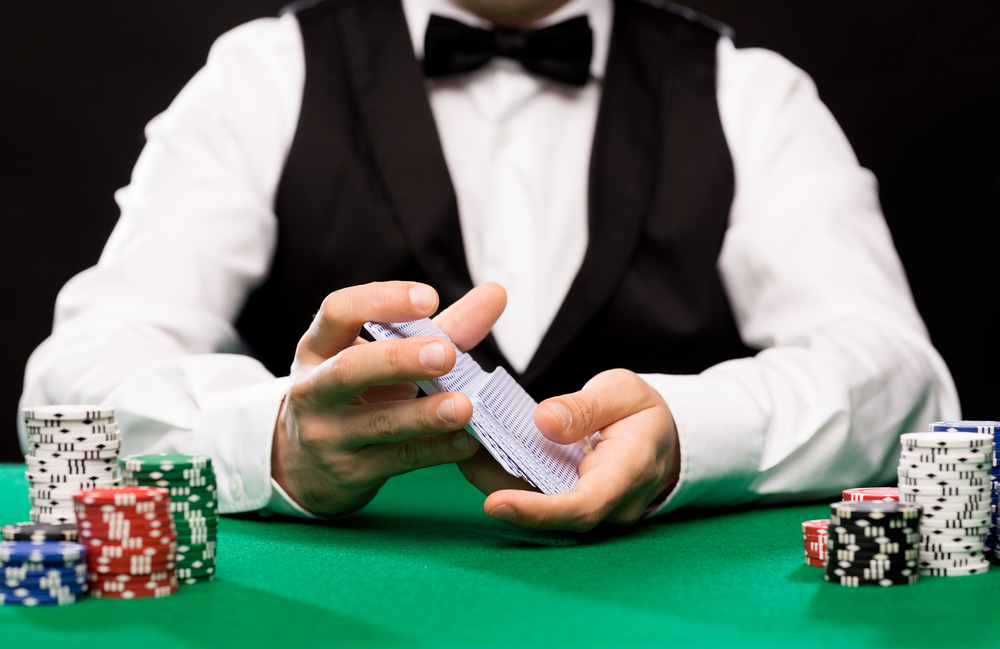 The dealer in a poker game has to do a lot more than just deal. As well as distributing cards, the dealer has to shuffle, manage the pot, monitor bets, and know where the betting rounds, raises and re-raises have got to, as well as whose turn it is to bet next.

We’ll assume you know how to play poker, and just need to learn about dealing poker. We’ll use Texas Hold’em as an example. because it has communal cards, and has several rounds of betting. What’s more, the dealership moves leftwards round the table as the “button” is passed on, so in order to play, you need to know how to deal. Online poker is great – but it doesn’t teach you to deal a real deck of cards.

How To Deal Cards – The Shuffle

The reason the shuffle is important, is that poker players are betting according to the odds they have memorised. And those odds only work if the cards in the pack are randomly distributed. So a poorly shuffled pack throws off everybody’s calculations – or worse, allows someone to cheat.

The “shuffle” is actually a series of actions, consisting of “riffles” and “cuts”. You’ll have seen the riffle many times. You split the pack in half, arrange the halves opposite each other, pick up each half, flex the halves, and then let the cards go, so that they interleave as they go down. Then straighten up the new pack, cut and repeat.

Follow this guide for the sequence – but with shuffling, nothing beats practising.

How To Deal Poker Hands

Remember, we’re assuming that you’re playing Texas Hold’em, and that you know how to play poker. The dealer must “burn and turn” the card on the top of the deck after each betting round. This means taking the card and putting it in the discard heap, or “muck pile”, as it’s called. This is a precaution against people using marked cards, where the back of the card has a secret mark, or is a subtly different colour, enabling the player to guess the identity of the card.

To some extent, the dealer is acting as the cop in the game – if someone raises £5 you have to check that they actually put £5 into the pot. Similarly, in a complex set of raises and re-raises, you’re the one who can always tell the player what the total bet currently is.